Launch Event for THE BEST KIND OF MAGIC! 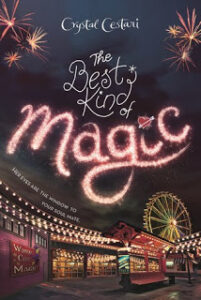 On Friday May 19th at 7:00 pm, I’ll be in conversation with Crystal Cestari at The Book Cellar in Chicago, celebrating the launch of her debut YA novel, The Best Kind of Magic. Come talk books and boys and witches and the Windy City with us!

Gilmore Girls meets Buffy in Crystal Cestari’s bewitching debut novel: THE BEST KIND OF MAGIC. Set in urban Chicago, this new Windy City Magic series presents a sharp-witted, sassy heroine that will have readers everywhere laughing out loud as they explore happily-ever-afters, and the unexpected road it takes to get there.

Amber Sand is more than she seems: high school student, baker with her heart set on the Chicago Culinary Institute when she graduates and… matchmaker? Though Amber doesn’t have witch powers like her mother, she have the ability to look into a person’s eyes and see who he or she is meant to be with! So when Charlie Blitzman, the mayor’s son and most-desired boy in school, comes to her for help finding his father’s missing girlfriend, she can’t help but take a glimpse at his future bride-to-be. Unfortunately, that future love is not Amber. But as they spend more time together, Charlie falls head over heels for Amber and she can’t help but feel the same for him. But as she continues to help him, and inevitably fall for him, there’s a truth in his eyes not even she wants to know.

About Crystal Cestari:
Crystal Cestari lives in the west Chicago suburbs where she works as a content strategist for a marketing agency. She received her MA in Mass communication from Kent State University and a BA from DePaul University in Chicago. She lives with her daughter and English bulldog. Visit Crystal at www.crystalcestari.com and on Twitter @crystalcestari.